Here are three more photos from our small collection that came from the San Francisco UPI office when it closed in the late 1960s. The date is probably 1931 or 1932, the location is a Goodyear plant, probably in Southern California. The airship is the Volunteer, the same blimp featured in last week's photo. 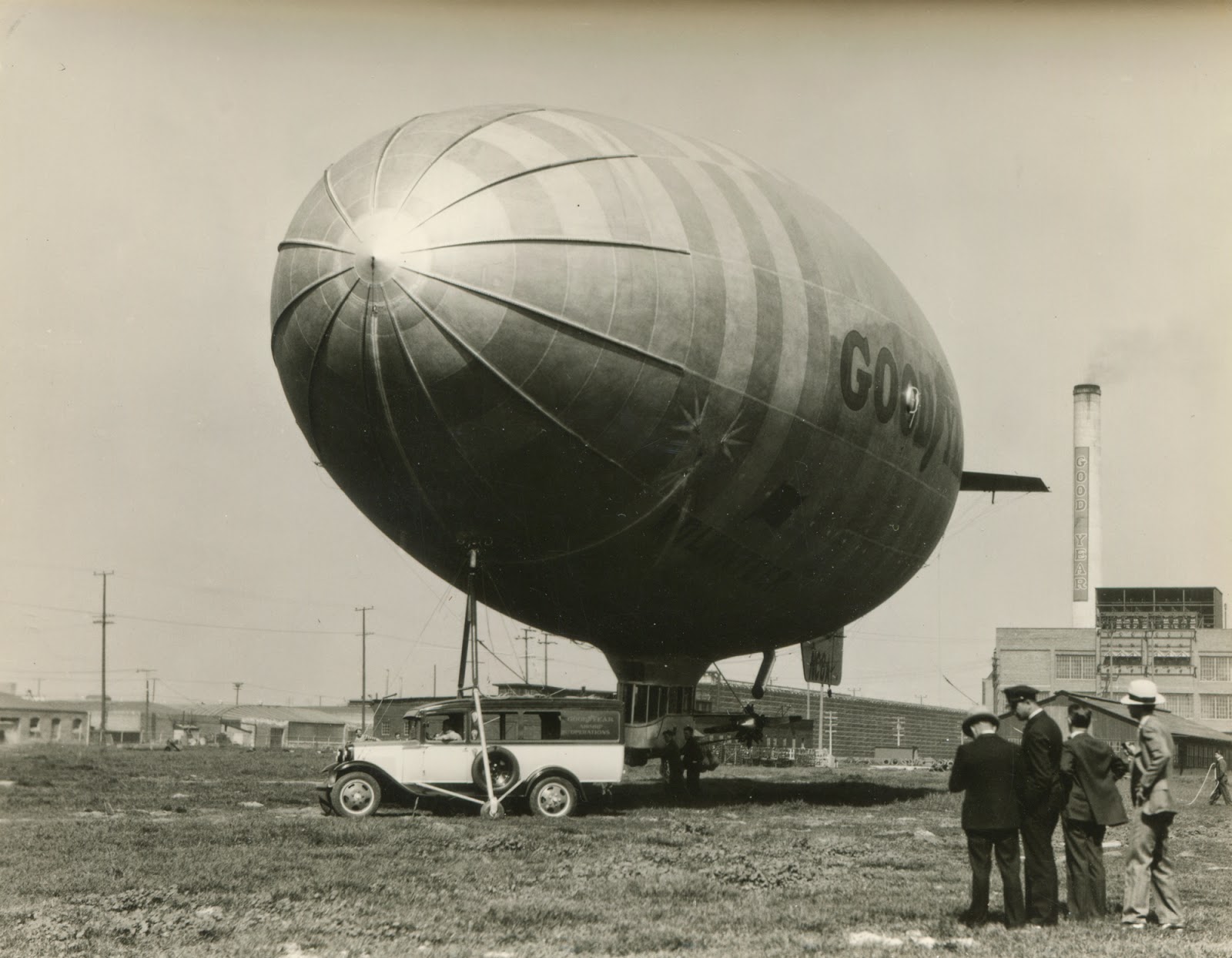 The Volunteer was Goodyear’s second Type TZ airship, and fourth overall (after Pilgrim I and II, and the Puritan). Goodyear’s president, Paul Litchfield, had a penchant for naming the airships after America’s Cup yachts, seeing the blimps as yachts of the sky. 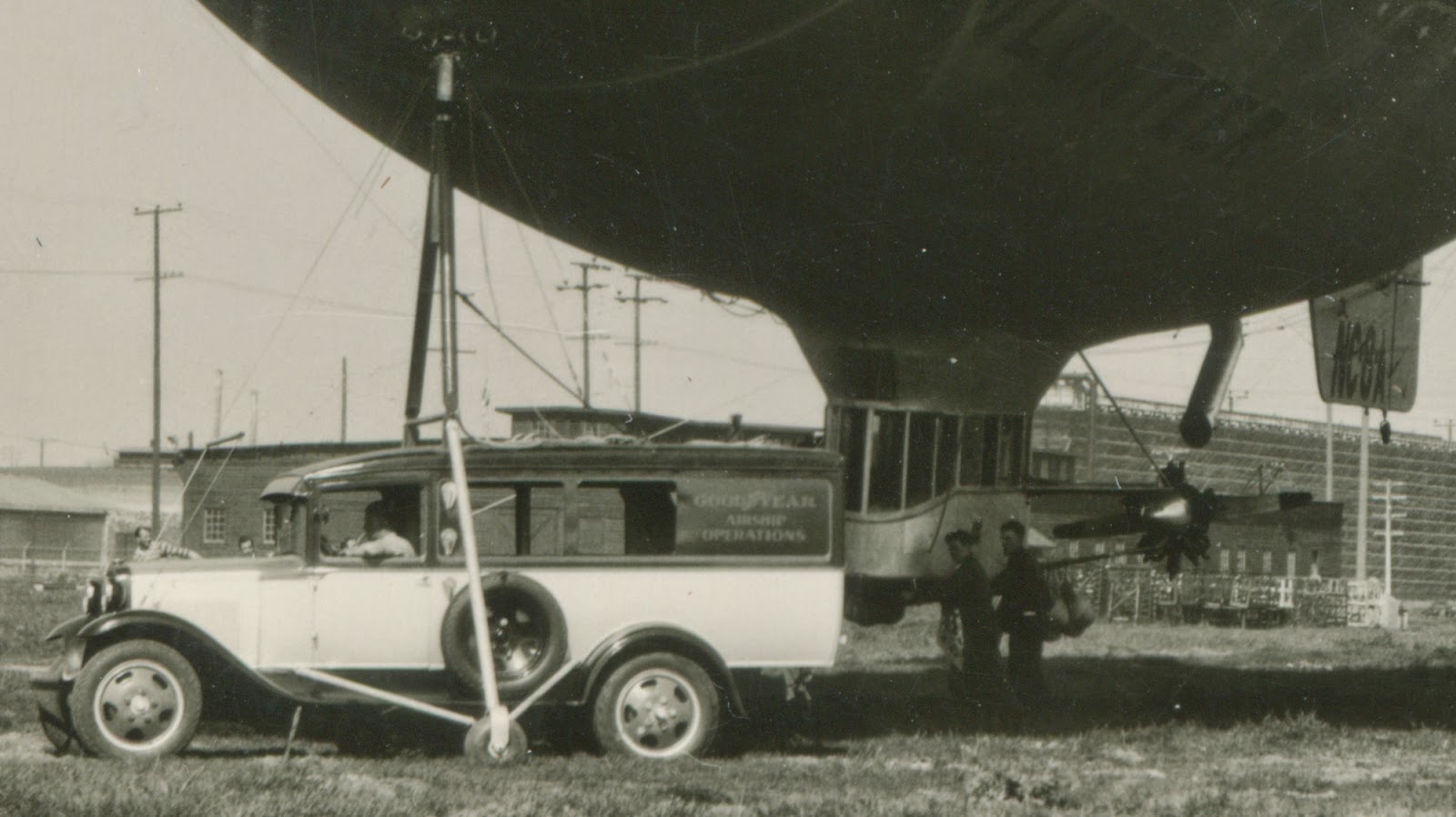 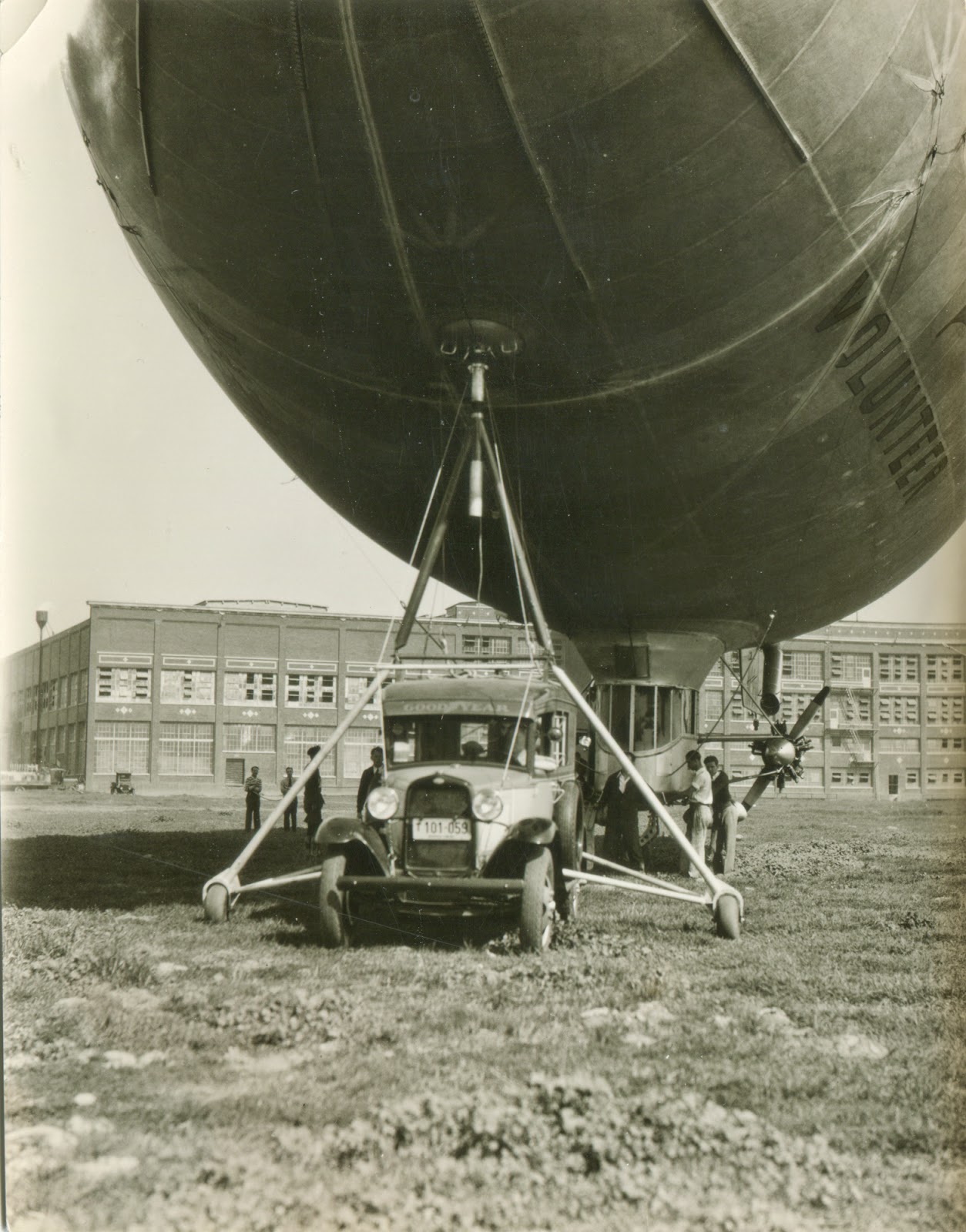 These three photos also feature Goodyear's west coast portable mooring mast, a 1930 Ford Model AA, the truck version of the Model A passenger car. It was fitted with a collapsable mooring mast and outriggers to keep it from tipping. The mast included a pivot which allowed the airship to weathervane. A Buick bus performed similar duties for Goodyear's east-coast airship. Now that Goodyear is transitioning from blimps to Zeppelins, they have selected a massive Mack truck to serve the same purpose in 21st Century.

The Volunteer series airships were the west-coast Goodyear advertising representatives. The first one first flew on April 27, 1929, and sported a 128-foot long, 36-foot diameter envelope which held up to 86,000 cubic feet of helium.

The Volunteer I was retired in late 1929, when Goodyear decided to replace the envelope with a larger, 96,000 cu. ft. one (it was 133 feet long with a 39 foot diameter), and the original 82hp Siemens-Halska engines were replaced with 110-hp Warner Scarabs. The “new” Volunteer retained the original car, and the original NC-8A registration number. 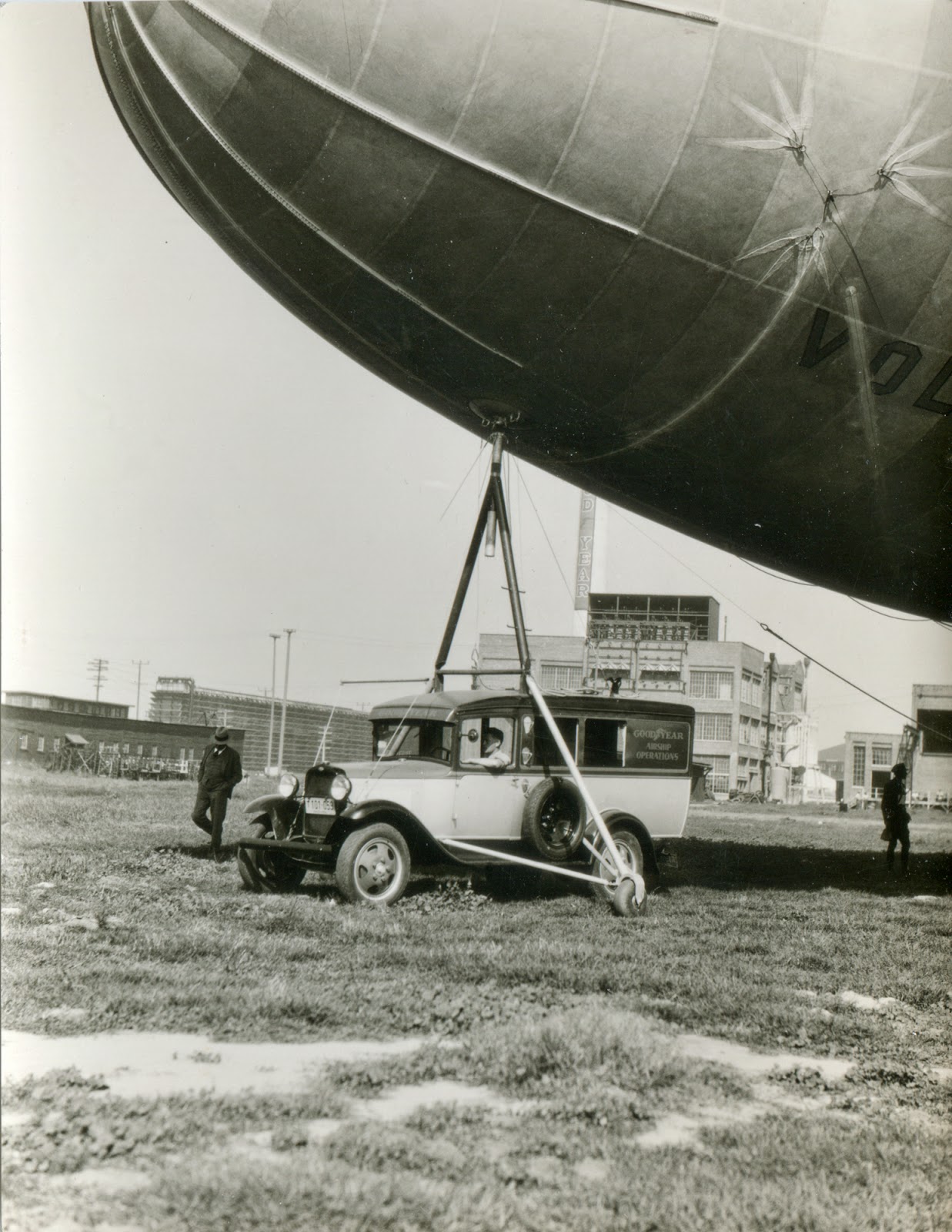 The II only lasted for two years (so, if my math is right, the II is the airship shown in our three photos), because Goodyear decided once again to expand the size of the envelope, installing 112,000 cu-ft bags. Ultimatey, there were three iterations of the Volunteer with this configuration, III, IV and V. In each case, the car and the registration were reused.

Odd little trivia twist: the Volunteer (the airship) was named after the Volunteer (the yacht) which was built in 1887 and successfully defended the America's Cup against the Scottish challenger Thistle that same year. The Volunteer, along with the two previous America's Cup yachts Puritan (1885) and Mayflower (1886) (which also had blimps named after them), was designed by Boston maritime architect Edward Burgess, the father of W. Starling Burgess who started the Burgess Company, the largest manufacturer of license-built Wright Brothers aircraft, until he sold out to Glenn Curtiss in 1916. 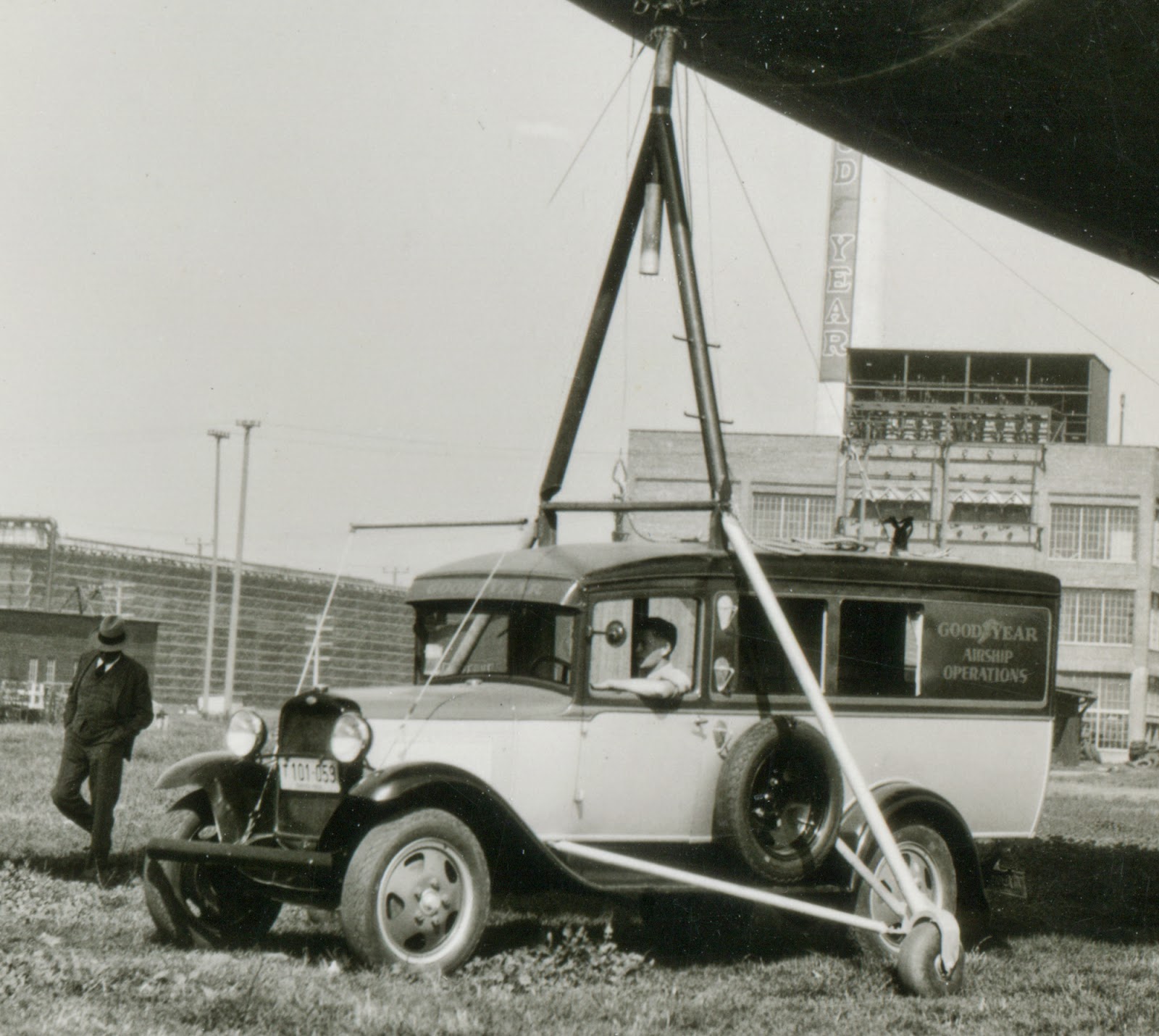 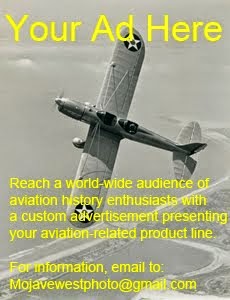